What is the Art Challenge?

It is whatever you make of it!

Each day, there will be one topic given, but you are also welcome to show something unrelated to that; for example, if you have your art project at home that you’ve always wanted to show to someone, here is your chance!

(Make sure not to infringe on any copyrights. Include attribution if required. I guess I need not say this because you are all smart and kind folks, but just for the protocol: Please refrain from forbidden material, hate speech, nudity, and the likes.)

Looking forward to your contributions! 🙂

Now that you have arrived at MEMO, tell/sing/draw/show/… us: What path has lead you here? Did you have a long travel path through your country? Or did you just travel all the way from one room in your home to the next (hopefully not stumbling over a bag)? Did your path self-intersect or contain loops? Whom did you meet along the way?

More figuratively, what path in life brought you here? What made you decide to join the Mathematical Olympiad?

How about your future? What path will you choose?

For a more mathematical interpretation: In graph theory, a path in a graph is a finite or infinite sequence of edges which joins a sequence of vertices which, by most definitions, are all distinct (and since the vertices are distinct, so are the edges). A Hamiltonian path is a path that visits each vertex exactly once. Can you draw a Hamiltonian path through the MEMO logo?

What other interpretations of the word “path” are there? 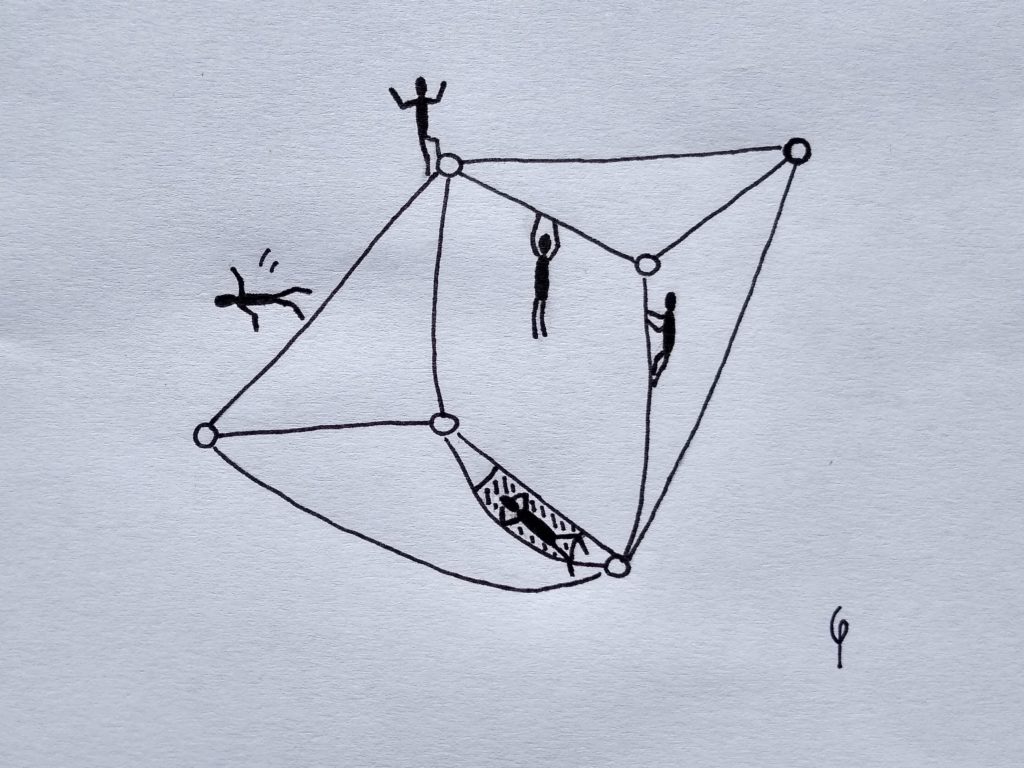 The circle is one of the most fundamental shapes; due to its physical properties, you will find it everywhere in nature. For example, it maximizes the ratio between area and circumference.

An engineer, a physicist and a mathematician are tasked by a farmer with creating the largest possible animal enclosure, given 100m of barbed wire. The engineer takes four pillars, creates a square of 25m x 25m, and gets an enclosure of 625m² that way. The physicist takes a large number of pillars, approximates a circle with a circumference of 100m as closely as possible, and has encircled around 795m² of land that way. The mathematician wraps the barbed wire around himself multiple times, then proclaims: “I define myself as being outside!”

Also in everyday speech you will encounter circles frequently. You have your circle of friends. You hopefully move only in the best circles. We are all part of the circle of life.

Also in your surroundings, you will find circles all the time: Your tea or coffee cup, bicycle wheels and car tyres, pots, pans, plates and many other things in the kitchen, satellite dishes, manhole covers, pipes, camera lenses, screws, …

In short, circles are everywhere — an observation with which we come full circle to the start of this post.

In biology, the tree of life is a model representing the relationships between all species on this planet (and, fun fact, in the last two decades since DNA analysis became widely affordable, we have learned so many new things that any biology book older than 20 years can be considered outdated to the point of being outright wrong).

You find your closer relatives in your family tree, and sometimes they will tell you that the apple won’t fall far from the tree.

Sometimes, you cannot see the wood for the trees. Sometimes you are barking up the wrong tree.

In the Bible, we find the tree of knowledge. The following story however, also involving a tree, might not be printed there in full text:

As everyone knows, Noah built the arc. Here is some additional information about what happened when the animals were getting off.

Now, the world was pretty well empty of land creatures, so Noah gave all of the animals instructions as they departed. To each pair of animals, he commanded, “Go forth and multiply!”

A couple snakes came slithering out, and he commanded, “Go forth and multiply!”

Well, Noah kept giving commands until all animals had departed, then he relaxed by walking through the forests. When he stepped over a fallen tree, he suddenly saw those snakes, well, er… multiplying.

“I thought you said you couldn’t multiply?” asked Noah.

“By logs we can!” replied the adders.

(I was once told that jokes are like user interfaces: When you have to explain them, they aren’t very good. However, since English might not be everyone’s first language — more precisely, since English might not be anyone’s first language of the people present —, the two puns here are “adder” (a species of snake, but also referring to addition) and “by logs” (“by” = “near”/”next to” and “log” = “fallen tree”, but also “by logs” = “using logarithms”). As for what logarithms do to multiplication, the exercise of looking that up is left to the reader. ;))

In mathematics, trees take us back to graph theory once more. A tree is an undirected graph in which any two vertices are connected by exactly one path, or equivalently, a connected acyclic undirected graph. That is, like in a real tree (unless something really weird happened to it during its growth), when looking at it starting from the root and going up, you will see that it splits into multiple branches several times, but the branches never reunite again and do not form circles.

The same by the way happens when you start at one particular leaf: You move forward from leaf to twig to branch to maybe another branch to another twig to another leaf, so you encounter several crossings, but never go in a circle, and (unless you make unnecessary detours, going forth and back on the same route) there is only exactly one path from any leaf to any other leaf (or more generally, from any part of the tree to any other part of the tree). Obviously, I am talking about a tree with infinitely thin branches here. 😉

A graph consisting of multiple trees is by the way called a forest.

Since trees — both the mathematical and the biological kind — are nice to draw, I very much root for you to have some great ideas! 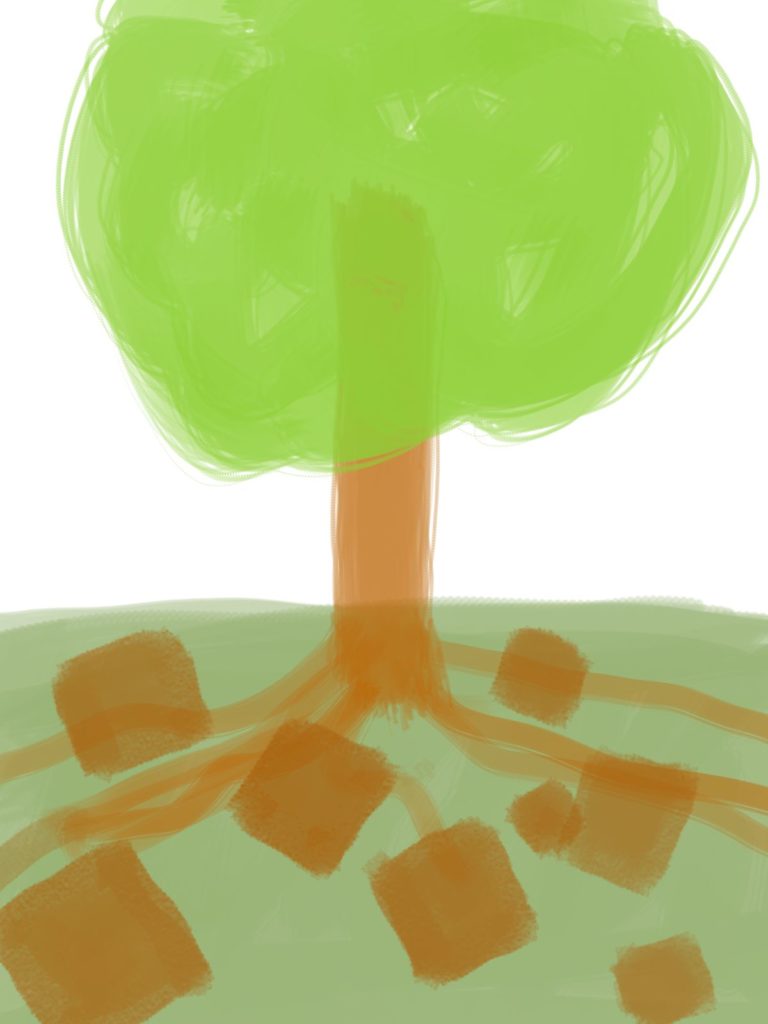 Every person is unique, and if we have learned anything this year, it is that we can work together to make this world a better place. Singing together on the balconies, bringing groceries for our elderly neighbours, collaborating on the Internet — I think humanity has shown some of its best sides this year.

This world is at its best when everyone feels welcome in it; when it is open to everyone.

“Tolerance” is a good start, though it rings a bit of silently bearing something that one does not really agree with. “Acceptance” is the next step, actually being willing to take someone or something as it is, without judgement. But “Openness”, being willing to actually see the world through another’s eyes, is what can help us to learn something new ourselves each day.

So when you meet someone whose political opinion you don’t understand or with whose way of living you don’t agree, be open to listening to their side of the story, and often you will find a wide open world you never even knew existed.

Keeping an open mind will open many doors to eye-opening experiences. So open your heart, welcome life and others with open arms, and you will find that nothing is an open and shut case.

Mathematically, openness describes the property that for every element of a set, there exists an environment that is entirely part of the same set. A bit more formally: A set S is open if for every element x in S there exists an ε>0 such that every y with |x−y|<ε is an element of S. (Now you finally know what the “Let ε<0” jokes refer to.) Note that for the sake of simplicity, we still are a bit vague about what “every y” means and whether “|x−y|” is even defined. But for easy examples, think of subsets of a Euclidean n-space, such as the set of real numbers (ℝ) or the plane (ℝ²), with |x−y| denoting the distance.

Similarly, if you take a circle without its circumference, that is, a point X in the plane and all points closer than the radius r, you again have an open set: For each point in that set, measure its minimum distance to the circumference, draw a circle with half that radius around it, and indeed all these points are part of the original circle.

This leads to the mandatory joke of the day:

As part of a personality test, the interviewer leads the mathematician into a room in which there is a chair in one corner of the room, and a bed with a very beautiful person in the opposite corner. The interviewer explains the rules: “You must stay sitting in this chair, and the other person will stay on the bed. Every three minutes, I will come into the room and move the chair closer to the bed by half the remaining distance. Are you willing to participate in this experiment?”

“Of course not!” exclaims the mathematician, “I would never actually reach the bed!”

Then it is the engineer’s turn for the job interview. The interviewer leads them to the same room and explains the same rules, and the engineer happily takes a seat on the chair.

The interviewer is a bit confused: “Are you aware that you will never actually reach the bed?”

The engineer just smiles: “Of course! But I will get close enough for all practical purposes.”

I’m open for your ideas, so open up your mind and show us what you think!

At least two types of growth have brought you here to participating in this very special MEMO: On the one hand your personal growth, becoming better at mathematics until you qualified for your nation’s MEMO team. On the other hand, the exponential growth of a certain contagious disease without which the MEMO would not have taken place this way.

So this topic is mostly here in order to have one day in the Art Challenge where you can also send anything related to Covid-19. (No joke of the day for you today — Covid-19 is no joke.)

It was a pity not seeing you in person this year, but it is said that absence makes the heart grow fonder.

For your future, keep in mind that growing old is mandatory, but growing up is optional. 😉

Mathematically, exponential growth describes anything which doubles in regular intervals, and you will find it in countless interesting settings, from biology over physics to economics and even social sciences.

If you want to baffle your not so mathematically inclined acquaintances with a riddle that looks hard only at first glance, try this: In the beginning, there is a single water lily on a pond. Each day, the area covered by the water lilies doubles. After 64 days, the entire pond is covered in water lilies. After how many days was half the pond covered?

You find this topic as exciting as watching grass grow? Well, I hope it will still grow on you. 🙂

MEMO is drawing to a close, so we are close to the Closing Ceremony now. Let me tell you that the first place was a really close call!

Mathematically, a set is closed under an operation if the operation returns a member of the set when evaluated on members of the set. For example, the natural numbers are “closed” under addition and multiplication, but not under subtraction.

So with this, the Art Challenge officially closes its doors; if you have any closing thoughts, feel free to share them with us!